On Tuesday, September 11, 2001, terrorists linked to al-Qaeda hijacked four passenger planes. Two were flown into the World Trade Center, one into the Pentagon, and a fourth crashed in a field in Pennsylvania after passengers tried to overpower the hijackers. Its target may have been the Capitol or the White House. The attacks resulted in the deaths of 2997 and injuries to more than 6000.

This year, we mark the 20th anniversary of the day “We Will Never Forget.” Craftsmen Online respectfully thanks, MW Carl J. Fitje, who was serving as Deputy Grand Master of the Grand Lodge of New York at the time for his reflection and remarks. We also pause to honor the memory of our Brethern who laid down their Working Tools that day and stand with their widows, orphans, families, and loved ones in support. Let us also keep in our prayers the first responders, military members, and veterans who gave their lives that day and continue to suffer the grave aftermath, and continue to protect us every day. 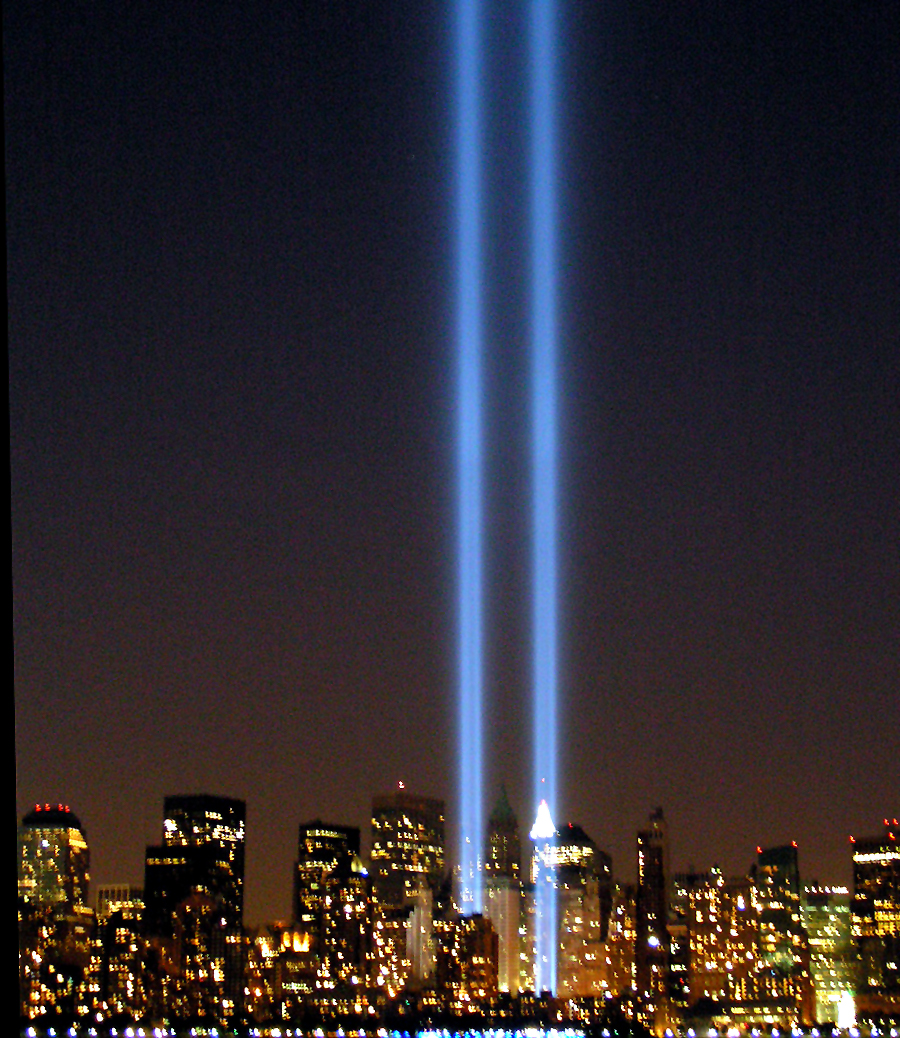 The 9/11 Tribute in Light illuminates the NYC skyline

I cannot believe that it is the 20th Anniversary of the September 11, 2001 attacks on the Twin Towers in New York City, the Pentagon and the crash in Shanksville, PA.

I recall the words of President Franklin D. Roosevelt when Pearl Harbor was attacked, saying, “This is a day which will live in Infamy .” Today, we look back on September 11, 2001 — for us in New York, a day which we will and never should forget.

I was Deputy Grand Master at the time of the attack, MW Carl J. Smith was Grand Master and MW Gary A. Henningsen was Grand Secretary. We were in complete shock and disbelief that an attack such as this could ever happen in the United States of America.

When the dust settled we quickly sat down and got to work to see what Grand Lodge could do to help out and assist those in need. We received tremendous financial support from Grand Lodges throughout the United States and the world.

All the money donated was given to the various agencies that were assisting with the recovery and the agencies who had lost people a couple of them were the Fire and Police Departments for their Widows. Grand Lodge received well over three million dollars in this effort. We received plaques from the Police and Fire Departments for Grand Lodge’s donations to assist their efforts.

Grand Lodge was also affected by people who were related to Mason’s who had died in this attack. The Grand Master, I, and the Grand Secretary hosted a luncheon for those affected and gave out checks to the families attending those unable to attend we mailed.

On a personal note my daughter’s husband, Lee Fehling a Fireman with Battalion 57 stationed in Bedford-Stuyvesant, was killed in the attack. My daughter Danielle was eight months pregnant at the time and it was a rough time for me and my family. Her daughter Megan was born on October 18, 2001, and is now 20 years old and in college in Boston.

The cleanup and recovery efforts lasted a long time. As a side note to the cleanup which not many Masons know about was that Grand Lodge had to rescue the famous St John’s Bible. At the time of the attack, the Bible was on display at Fraunces Tavern in lower Manhattan near the Twin Towers. An exhibit called “Masons in the Revolution” was about to open and after the attack, Fraunces Tavern was covered in debris and thick white powder. There were indications of further building collapses about to occur and Grand Lodge wanted to remove the Bible to a safer place at our Library on 23rd Street. A call was placed to the Police Department where we know some people and when asked why they were told and were awed and delighted to be a part of the rescue mission.

When I was sworn in as Grand Master in May of 2002 Grand Lodge continued its efforts in donating and giving of time to assist in any way we could and this lasted well into the end of the year and 2003.

On this 20th Anniversary of September 11, 2001, we should always keep this day on our minds as a constant reminder of that dire day in the history of our Nation and to remind us that we could be living in a land of turmoil where terror attacks seem to never cease. Our Armed Forces protect the Freedoms we all cherish and I thank the Grand Architect of the Universe for the blessing of democracy. Stay safe, and may God Bless you and your families.